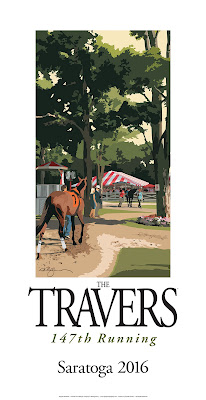 We are delighted to present this year’s poster — “August Light.” Those of you who have already purchased the poster will note that we titled it August Shadows when we went to the printer, but as it rolled off the press, August Light instantaneously became its name.

We never tire of Saratoga’s paddock. We love how the great trees and flowers divide the paddock into areas trainers use to prepare and saddle their horses. Simple and elegant, the paddock provides different settings that cater to each horse’s preference for privacy or publicity. Delighted fans get as close as they can to the action in the paddock, leaning on the white fences that define the famous space. We spend many afternoons trying to capture the slanting light of the August sun and the dramatic shadows it creates. The horse in the foreground represents Keen Ice, winner of the 2015 Travers Stakes.

This poster is a tribute to one of the great illustrators of 20th century — Bernie Fuchs. In 1975, Fuchs was the youngest illustrator ever elected to the Society of Illustrators’ Hall of Fame. He painted a now famous series of illustrations of Saratoga. One was a view of the Saratoga paddock that I have always loved. Its light is marvelous! So this year, we pay homage to the master Bernie Fuchs and create our own version of the light and shadow in the incomparable Saratoga paddock. Hope you like it. Thank you, Bernie.

If you scroll down in this blog, you will see our signing schedules both in Saratoga Springs and Middleburg, Virginia. We have confirmed that, once again, we will be at the Saratoga Race Track on Travers Day. Hope to see you this summer! Enjoy!