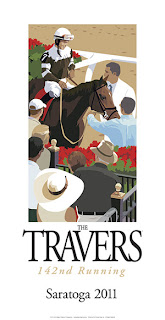 Winner's Circle
2011: The Travers 142nd Running, Saratoga
Saratoga's Winner's Circle: This is the place where every horse, trainer, jockey, and especially owners want to end up. It takes preparation, hard work, courage and more than a little luck to get to this hallowed ground. The little alcove off the track at the finish line outlined with wrought iron fencing and flowers is a relatively new addition to the venerable racecourse. It's just big enough for owners, trainers, and grooms to stand along side their victorious runner and jockey for the presentation of the historic Man O' War Cup, or Travers Trophy on Travers Day.

This is the 26th poster in the longest-running series of its kind. The 2011 Travers poster (and the Saratoga version) are available after June 24, 2011 on this web site and at selected stores and galleries in Saratoga Springs. See you at the track.