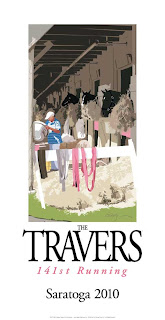 Roommates
2010: The Travers 141st Running, Saratoga
This year's poster finally shows the runners at home — the barns and stables of Saratoga's famous backstretch. Far from the manicured racetrack and the crowds, these three thoroughbreds are back in the quiet of their stalls and they're ready to eat. They're watching a fellow get their food ready and they just want to make sure he does it right!

This is the 25th poster in the longest-running series of its kind. The 2010 Travers poster (and the Saratoga version) are available after July 6, 2010 on this web site and at selected stores and galleries in Saratoga Springs. See you at the track.